Rehearsal is a poly media work initiated within the Belgrade’s edition of the International Actopolis project “Formally Informal”. The work is conceived as a superstructure and modelling of a self-organized cultural scene at a local level. It was evolved in several stages: a discursive experiment via a series of dialogues, a sound installation, web and the open dialogue with a resume of results.

In the context of “great divides” in which Belgrade’s cultural scene reproduces existing social interactions, what is evident is the vast fragmentation and focus on different, more or less, convincing attempts of individual entities to sustain themselves and consolidate regardless, and perhaps even precisely because of, the weakening of others. Such induced relationships resulted in a high degree of disunity; the situation has been radicalized and even maintains the system from which it was formed. Through the perseverance of many independent organisations we have come to negate the self-organisation in its very domain. Thus the question “what is a self-organized cultural scene?” is consequently replaced by its conditional form: What could it be? Why should it exist? What are its aims?, On which principles would it function? Can we even begin to imagine it? What would it look like if we tried? Multiple artists and cultural workers answered the line of questioning with the aim of articulating a new construct. Consequently, twenty principles of self-organization were mapped and explored, along with analysis of overlaps and differences. In September 2016,  Rehearsal continued: In a socio-drama about a new city model for Oberhausen (Germany), the outcomes from Belgrade’s inquiry were compared with the ideas and needs of citizens in Ruhr district 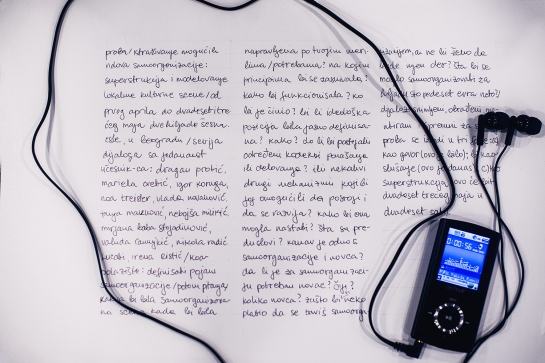